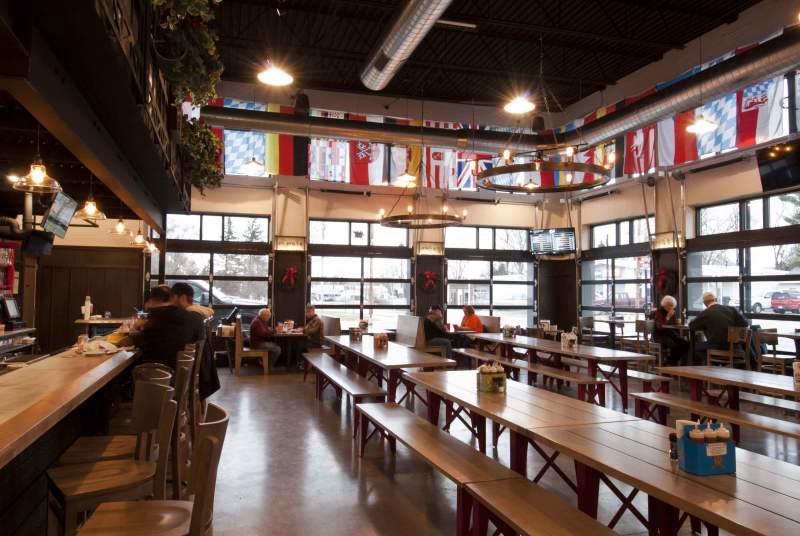 Translated, it reads, "One turns water into precious drops by mixing it with malt and hops!" It's a joyous and pithy encapsulation of brewery owner David Ringler's enthusiasm for his new business – and, by extension, of West Michigan's ever-growing love for craft beer.

So it's no surprise to learn that the Cedar Springs Brewing Company is Ringler's passion project. (The title on his business card dubs him "Director of Happiness.") It officially will open to the public Friday, Nov. 13, 2015 with a ribbon-cutting and beer-tapping ceremony, more than a year after breaking ground in downtown Cedar Springs.

The 8,000 square-foot new-construction building features a 150-capacity dining hall with a bar and Euro-pub style bench seating. The special glass-top table with the coasters is reserved for members of the brewery's Stammtisch club, inspired by traditional small-town German bars, which held a table for regulars, often community members who would discuss local issues over beers. Out back is space for a beer garden, which will seat another 70 or 80, and will be open in the spring.

"The goal is to be a public house in the Cedar Springs community – a place for locals to come after football games," Ringler said. "I also think it'll be a destination in Northern Kent County."

It was a long time coming – 20 years for Ringler, a 1988 Northview High School grad who went to Germany in the early 1990s as an exchange student, and to play American football (he was quarterback for the Landsberg Express in the German league). Homebrewing was his hobby, and he learned about German beer culture and the craft by visiting beer halls and enjoying a volunteer apprenticeship at the Fliegerbrau brewery in the Munich suburbs.